A Story of Native vs. Web

When your organization makes the wise decision to invest in an app, you have some choices to make. The most important being, “Should our app be native or web-based?” To help answer that, we've illustrated a helpful scenario:

Dick is a foodie and an iPhone user and Jane is an art-lover and Android loyalist. They are excited to travel to Paris for the first time and enjoy the quintessential French experience. English is their first language, and they both understand some basic Spanish, but no French… so they decide to hire an interpreter/tour guide to get the most out of their trip. They are presented with two choices:

Pierre, who grew up in Paris, has an advanced degree, speaks impeccable English, has a comfortable and secure vehicle with a seasoned driver and security guard, and has a variety of tour options in his repertoire, all of which he has conducted many times and honed with each experience. He has exceptional credentials, meets and exceeds all his industry standards and guarantees a personalized, action-packed tour to suit Dick’s culinary bent and Jane’s artistic interests.

Juan, who has been to Paris several times, speaks impeccable Spanish, but only passable English and French. Between the Spanish and English, they could probably communicate with each other. For tours he uses the public transportation system, which is affordable and fairly reliable, but can be slow and inconsistent. His one and only tour option has some decent reviews for providing a basic French experience, but two or three of the days feature things that do not interest either Dick or Jane. The three of them would travel with no security or driver, which will keep costs down, but comes with certain risks.

Who should Dick and Jane choose?

Pierre, of course. Juan can do the job, but it will not be the experience they deserve or desire. With Pierre, the investment will have a much greater impact on their lives with a fulfilling, smoother-sailing and worthy experience.

So, in case you haven’t deciphered this parable yet, Pierre = Native Mobile App and Juan = Web App. The moral of the story is when looking to invest in your mobile app, native is the best choice.

If you have an Android, you’d download a native app from the Google Play Store that would be tailored to that operating system and designed to use the features and layout Android users are accustomed to. If you use an iPhone, you'd download a native app from Apple's App Store that'll then integrate well with the phone’s functionalities (such as push notifications, GPS and the camera). The app would be intuitive design-wise for iPhone users to navigate.

In contrast, a web app has no specific tailoring to iOS or Android design, typically making navigation very clunky and abnormal. Web apps put a native wrapper around themselves to get past app store reviews, but in essence are only made of 1-2% native code. They can’t use native features.

- Access to all device hardware, such as Bluetooth, camera, face ID, etc.

- No annoying sync and refresh buttons web apps use

- Never uses web bridges, which are not as secure as using REST API SSL secured endpoints. These endpoints are industry best practice for integrating sensitive data like a member database 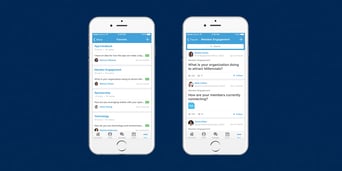 Your App: A New Reason for Members to Stay